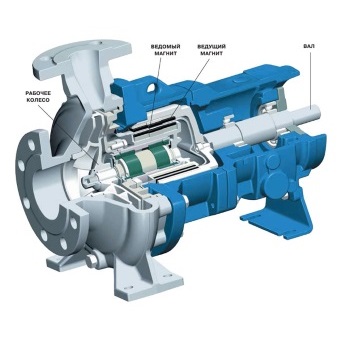 The pump is one of the most ancient mechanisms created by man for pumping water. The Russian name “pump” instead of the foreign name “pump” was invented by Mikhail Vasilyevich Lomonosov. Pumps are different from other vintage water-lifting devices, such as the water-lifting wheel and the elevator. The first was a wooden wheel with buckets fixed on it that people were spinning. And one of the types of noria (from the Arabic word, meaning “pumping station”) looked like a moving rope or chain with buckets. In ancient Egypt, 3000 years ago, with the help of norias, water was raised from a depth of up to 100 meters.

History has not preserved the name of the inventor who placed the noria in the trench and replaced the buckets with disks or balls that drove the water along the groove. So, in fact, the first volumetric type pump was created. By the way, when a man shovels water through a ditch, he uses the same principle. At least from the III century BC. er people use the so-called Archimedes screw to supply water - a screw placed in a wooden pipe. A similar design is used in modern meat grinders. Most likely, Archimedes improved the mechanism that already existed. Archimedes screw was used until the beginning of the twentieth century.

The first known piston pump was invented by the ancient Greek mechanic Ctesibius of Alexandria, who lived in the III century BC. er Made of bronze, he had all the basic elements of a modern pump: a cylinder, a piston (plunger) and valves. Such a pump was able to create a strong stream of water, so he and his improved versions served in Ancient Greece and Rome primarily to extinguish fires, but not only. The disciple of Ctesibia, the famous mechanic and inventor Heron of Alexandria, wrote in his treatise that a fire pump was made like a well pump. The pump of Cteshibia was too perfect to be the first mechanism of this kind, especially since the explanation of why water follows a piston - “nature does not tolerate emptiness” - is found even in Aristotle, who lived in 384–322 BC. er

In the Middle Ages and New Time, piston pumps were widely used in mining industries for pumping water from mines.

Despite the fact that pumps with rotary motion of elements are capable of developing power by a third more than with reciprocating, they have not been developed for a long time. Only in the XV century, Leonardo da Vinci had the idea of ​​a centrifugal pump in which water, when interacting with rotating blades, moves from the center to the edges. In 1558 several designs of pumps were described in his book by an Italian military engineer and mechanic Agostino Ramelli. Two of them still apply today. But the first working design of the rotary pump (with rotating gear wheels) at the beginning of the 17th century was created by the rector of the Jesuit college in Lorraine Johann Leirehon, and the centrifugal pump in 1689 by the French physicist Denis Papin. The Papen pump consisted of a two-bladed wheel rotating in a casing. At that time, the great interest of scientists to this problem is

However, the lack of powerful and fast engines made such pumps uncompetitive and generally hampered the development of this type of technology. By the way, the first actually used steam engines in the 18th century were created specifically for driving pumps for pumping water from coal and ore mines. The first steam engine to drive a piston pump was created in the years 1705-1712 by the English inventor Thomas Newcomen.

The use of modern materials, engines and technologies is rapidly accelerating the further development of pumps. Currently, the pump unit is the most complex device, which includes mechanical and electrical components, as well as monitoring and control systems.

Modern pumps work not only with water, but also with other liquids, including contaminated with various substances. New technological processes place ever increasing demands on pumps. At the moment, one of the most difficult tasks that pump developers solve is pumping hazardous liquids. Indeed, in the case of a poisonous or flammable liquid, it is necessary to protect both the person and the environment from any leaks. Also, do not forget that each leakage leads to a loss of the product, and hence to financial losses, especially significant at the high cost of the product. That is why a new round in the development of the design of pumps is associated with hermetic pumps.

Let's see where the leak occurs, using the most common centrifugal pump as an example. In such a pump, the shaft, fixed in bearings, rotates together with the impeller mounted on it. The engine is located outside. Leakage occurs where the shaft exits the pump housing, at the points of contact between rotating and fixed parts. It is this place that must be sealed or, as experts say, sealed.

In the early models of modern pumps used the so-called packing devices. They are a camera from the outside of the case in the place where the shaft goes outside. Around the shaft laid sealing material - gasket. Then, using a special device (in the simplest case, nuts), the packing was compressed, pressing against the walls of the chamber and the shaft, thereby preventing liquid from flowing out of the pump. The name “gland” has been preserved since the time when hemp was impregnated with grease. Now use cords of round or square cross-section of elastic material. The lack of stuffing devices - shaft friction on the packing, which leads to their fragility.

Since the Second World War, the packing devices have been replaced almost everywhere successfully with mechanical mechanical seals. They now seal the pump by separating the two media. Let's get acquainted with their design closer.

The main elements of the seal are two rings: movable, which rotates with the shaft, and stationary, which is attached to the pump body with a pin. The fixed ring of the shaft does not touch, thus avoiding wear; therefore, tightness is ensured by the contact of the surfaces of these rings, which form the so-called friction pair, which is also called the main seal. These two rings are the only rubbing elements in this device. The gap between their surfaces is equal to the roughness height of these surfaces and, as a rule, does not exceed one millionth of a meter. In a properly operating friction pair between friction surfaces, a thinnest film of fluid must be present, providing lubrication and heat removal.

The choice of seal ring materials is not an easy task. Rings must have sufficient strength and wear resistance to withstand the effects during operation of the pump, as well as chemical resistance to the pumped medium. In addition, friction couples must withstand high temperatures due to friction. Thus, friction pair rings are the most complex products, the development of which requires theoretical and calculation methods of mechanics, thermodynamics, hydraulics and tribology. Taking into account the small gap between the rings, the manufacture of modern mechanical seals falls into the category of nanotechnology.

To provide the necessary contact, the movable ring is pressed against the fixed ring by a spring, spring unit or bellows (this is the name of the elastic single-layer or multilayer corrugated sheath made of metallic, non-metallic and composite materials). For additional sealing, secondary seals are used, which are O-rings made of elastomer.

The described mechanical seal is called by the number of friction pairs single. It does not exclude leakage of the pumped medium, but only minimizes it. Further development of the technology of sealing technology has led to the emergence of double end seals, for which various auxiliary systems are used, also called “washing plans” or “piping plans”. In the area of ​​the seal, located between the two pairs of friction, is fed a special fluid, called a barrier. Its pressure must be higher than the pressure of the pumped medium in the sealing area. Thus tightness during the work is provided. In addition, the barrier fluid forms the necessary film on friction vapors, removing heat and providing lubrication in the event that the pumped liquid does not have the necessary properties. For example,

Double seals with barrier fluid can eliminate leaks, but are quite expensive and difficult to maintain. In addition, friction pairs after some time fail due to wear. They need to be constantly checked and replaced.

However, not only mechanical seals help avoid leakage. The development of electromechanics and the theory of electromagnetism made it possible to take a different look at the pump design, which resulted in pumps that, in principle, prevent contact of the pumped liquid with the external environment — these are pumps with a magnetic coupling and pumps with a “wet rotor”. Recall that the rotor is the rotating part of the machines, and the clutch is a device connecting the rotating parts of the machines (for example, shafts) for transmitting the rotation.

The principle of operation of pumps with magnetic coupling is based on the transfer of torque from the engine to the pump impeller using permanent magnets made of rare-earth metals (see figure). The motor rotates the shaft with the leading magnets attached to it, which are located outside the sealed pump casing. The movement of the driving magnets causes the driven magnets to rotate, which are located inside the pump casing and are connected to the impeller.

Since the rotation is transmitted at a distance, there are no holes in the pump casing leading outwards, respectively, and there are no leaks. The higher price of pumps with magnetic clutch is associated with the high cost of materials of which the magnets are made. As a rule, they are made from alloys of neodymium, cobalt and samarium. NdFeB (neodymium-iron-boron) alloy is now considered the most effective. But the service life of such magnets is tens or even hundreds of years, much longer than the pump itself.

A “wet rotor” pump is a mechanism that combines an electric motor and a classic centrifugal pump. By the principle of operation, it is similar to a pump with a magnetic coupling, only the role of magnets is played by the coils (windings) of the stator (fixed part of the electric motor) and the rotor. It is called wet because the rotor, protected from the closure by a special cylinder (jacket), is located inside the pump casing in the pumped liquid, which simultaneously lubricates and cools the bearings. The impeller is fixed on the rotor shaft. Torque from the "dry" windings of the stator is transmitted through an airtight sheath to avoid leaks. This design makes the pump very compact with a minimum of parts. True, due to the fact that the stator and rotor coils are separated by several partitions, the efficiency of such pumps is relatively low. This leads to increased power consumption.

As you can see, there are several options for ensuring complete tightness of pumps. Depending on the properties of the pumped liquids, operating conditions and economic feasibility, specialists select the desired design. The rapid development of both technologies used in the production of mechanical seals and technologies related to the electromagnetic field will determine the vector of development of pumping equipment.