What is SCARA, and SCARA-based robots 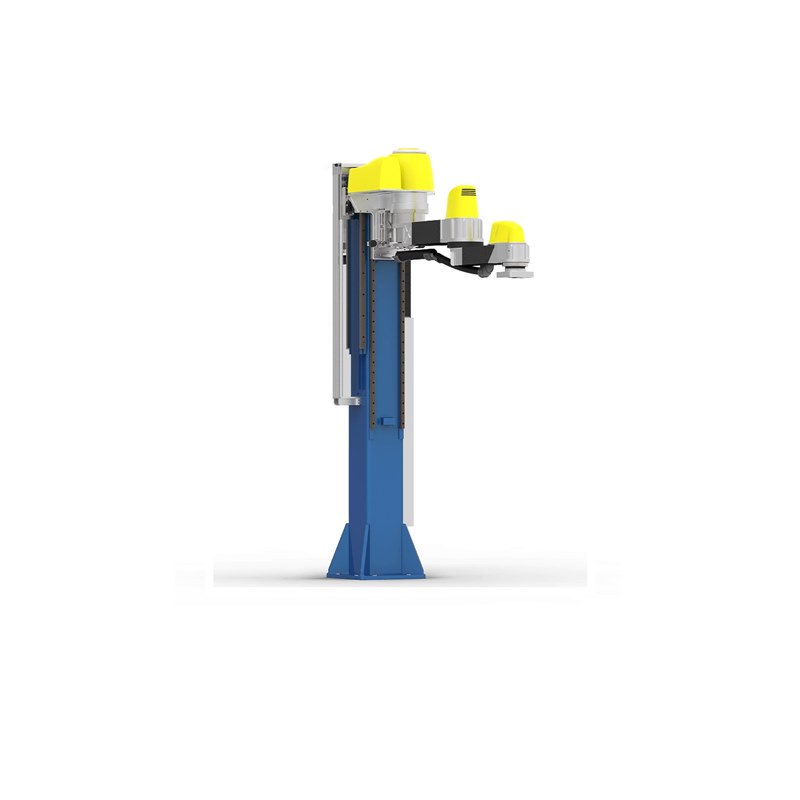 SCARA  (Selective Compliance Articulated Robot Arm) is a kinematics based on a lever system that provides the movement of the final link in the plane due to the rotary drive of the mechanism levers. The classic SCARA mechanism consists of two levers connected at one point, and 2 independent drives, one of which is mounted in the joint of 2 levers and rotates them relative to each other, and the second is installed at the base of the first lever and rotates it relative to the working plane .

A special case of the SCARA mechanism is the 5-lever SCARA mechanism, in which 4 levers and 2 rotary drives in the base with non-coincident axes are used to move the end point.

Key parameters of mechanisms based on SCARA

The installation location and orientation are affected by the required coverage area and the location of the objects that the SCARA robot must work with. The main task is to combine the coverage area of ​​the robot with the required working area. If it is necessary to perform complex tasks or if it is necessary to move along 4 or more axes, robots with Cartesian mechanics are more complex and bulky. SCARA robots take up less space and are easier to install.

Orientation of objects with which the robot works is also easier if the SCARA robot works. The SCARA manipulator has the ability to work and rotate parts from any angle. To achieve the same flexibility in operation, the Cartesian robot must have an additional feed module, which increases the load on the Z axis, thereby reducing the permissible payload.

Most SCARA mechanisms can be mounted on any plane (wall, ceiling, floor) without changing their operational properties. This advantage is widely used in production facilities with a limited volume.

In addition to the payload, the most important characteristic of an industrial mechanism is the speed of a given operation.

SCARA-based mechanics are characterized by non-uniformity of resolution of movement in the XY plane. For SCARA mechanisms, it is customary to talk about a resolution gradient in a given plane. The maximum accuracy (the smallest absolute error and the highest resolution) is observed at the origin (in the center of the mechanism). As you move away from the center (with an increase in the length of the lever, ie, lengthening of the SCARA “arm”), the resolution deteriorates.

Due to the absence of stretching elements (drive belts) in the structure, the SCARA mechanism is characterized by high repeatability of the movement results without changing the accuracy. This means that SCARA robots can perform sequential, identical operations without the slightest deviation.

Initially, SCARA mechanics were developed for moving, assembling and assembling and were especially widely used in the electronics industry and conveyor systems. Currently, the commercial use of SCARA is most often mentioned in the context of  robotics  when creating  manipulators . As it is commonly called, a  robot  is an automatic device designed to carry out various kinds of mechanical operations, which operates according to a predefined program. In recent years, this technology has been successfully used in the field of 3D printing to create  3D printers , where in addition  to SCARA technology  , Cartesian, delta and polar types of mechanics are also popular, and  all they have their own advantages [1] .

With respect to robots that currently use SCARA mechanics, two large groups can be distinguished:

A fundamentally new configuration of the industrial robot manipulator, created in Japan by scientists at Yamanashi University  , appeared for the first time in 1981 and was called "SCARA" (Selective Compliance Assemble Robot Arm - assembly robot arm with selective flexibility). Unlike a robot operating in an  angular coordinate system , the rotating SCARA joints are located in a horizontal rather than a vertical plane using vertical mobility for the translational movement of the gripper. This configuration, combining the properties of angular and  cylindrical coordinate systems, proved to be very effective. Due to the high rigidity in the vertical direction, SCARA robots can carry significantly higher payloads than other assembly robots, and at the same time are very convenient for assembly operations. The scheme was widely used for assembly robots, and a number of companies, including such world-famous as  IBM  (USA), on the basis of licensing agreements produce assembly robots of this type; one of the most advanced Japanese models was called "SKILAM", which means "dexterous hand."

Any  CNC  coordinate machine is  designed to move the tool along the specified coordinates. In most cases, these are movements along XYZ coordinates, although work with  polar coordinates is  also not excluded. The rules of the tool and the algorithm for moving along the coordinates are prescribed in a special machine code. The most commonly used widely used  G code . There are a huge number of similar CNC machines: from small coordinate tables and  3D printers  to full-fledged  CNC milling machines. Due to the limited rigidity in the XY plane, the use of CNC machines based on SCARA mechanics has certain limitations. Due to the advantages of SCARA devices in speed, size and weight, they are used in small-sized machines for lightweight CNC operations (engraving, processing of soft materials) and 3D printers. The processing speed and properties of the materials processed by SCARA CNC machine completely depend on the strength and stiffness of the hands incorporated in the production of the SCARA machine.

From Wikipedia, the free encyclopedia